30 November 2017  |  By Dr. Lee Tasker  |  Advocacy Anything but sorry Autism Canadian Down Syndrome Society Down Syndrome Giving birth to a baby with Down syndrome Trisomy 21 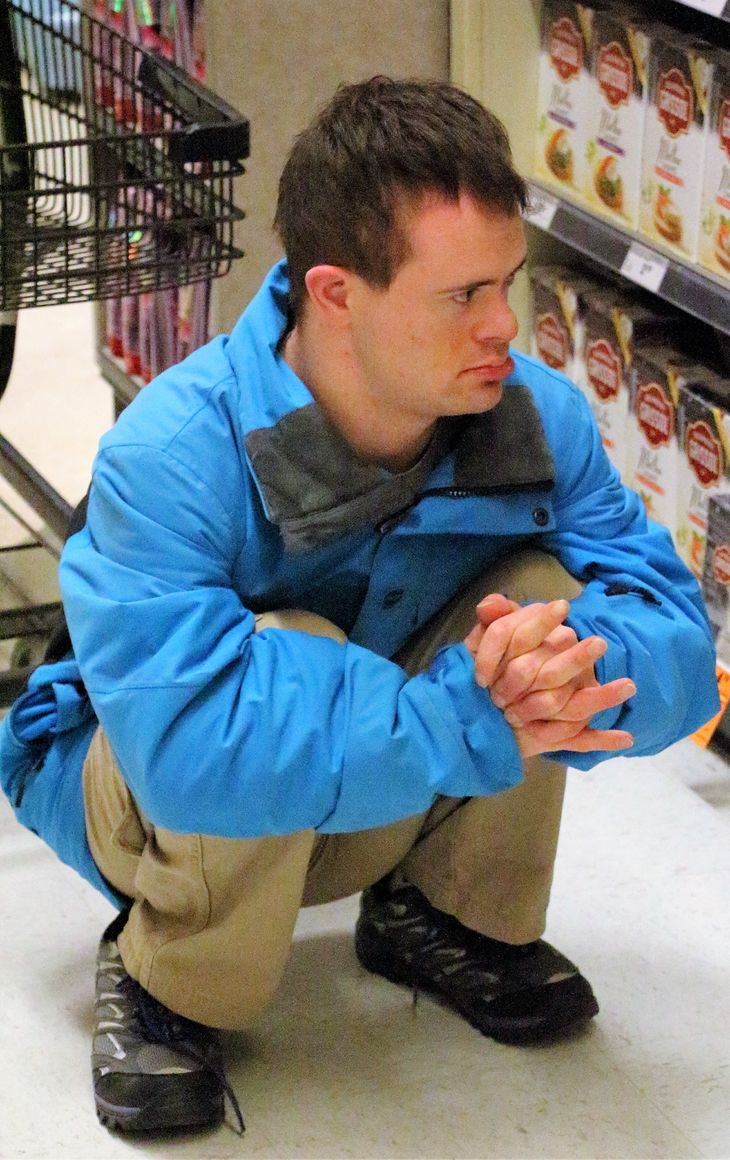 “Anything but sorry: what to say when a baby is born with Down syndrome” is a recent campaign launched by the Canadian Down Syndrome Society (CDSS). It’s purpose is to change society’s perception that we should be congratulating parents rather than sending our condolences.

This got me thinking of how I use the “s” word to apologize for my adult son’s behaviour when we are in public. He naturally behaves differently than most, given he has Down syndrome and Autism (DS-ASD). I, in turn, react by saying, “I’m sorry.” A typical example is as follows:

We walk into our local grocery store and my son’s behaviours immediately emerge. Firstly, I get him to push the grocery cart (that’s his job when we go shopping). It is not uncommon for him to inadvertently knock into a few displays and one or two shopping carts in his pathway.

The extent of these collisions is more offsetting rather than harmful. Yet, I typically react by muttering “I’m sorry.” I then assume the cart-pushing duty, which in turn evokes a second common behaviour of his. He gently squats down in the grocery aisle, inadvertently obstructing other shoppers from getting around him. So, what I do next?

I say, “I’m sorry,” and promptly bend down, grasp his elbow, ease him into a standing position, and cradle him against me to allow them to get by.

Some, especially those who quickly recognize his characteristic features of DS-ASD, respond with a smile of understanding. But some tend to respond in a somewhat patronizing way that signals their appreciation of my apology for being inconvenienced by his actions.

So, what negative message am I subconsciously sending to my fellow grocery shoppers, and more importantly to my son, when I apologize for his behaviour? Upon reflection I think I'm saying, "I know I shouldn't bring him here because he's only getting in your way."

Quite frankly, this is the opposite message I want, and need to be sending because, as his parent, I am teaching him to become as independent as possible in essential activities of daily living, and learning to grocery shop is one of them. As part of this quest, our family has created a vision statement as follows:

This statement has served us well. For example, when we moved to Calgary some 13 years ago, we successfully advocated for his full inclusion in the regular classroom by juxtaposing ours with one of Calgary Catholic School District’s (CCSD) vision statements:

By identifying our common visions, we became more successful in getting him taught in the regular classroom and without much need of our ongoing advocacy. In addition to learning the basics of the ABCs and the 123s, he also learned appropriate and valuable social skills.

These social skills included such things as sitting quietly in a school assembly or at his desk; patiently standing in line to buy a few cookies during a bake-sale; turn-taking with his peers; and how to get along with others in a peaceful manner. Other students also benefited from his inclusion.

A grade-school example jumps to mind. He’s in grade six and his gym teacher tells me he can tell which team activities the class likes best and the ones they don’t by whether my son is the first one picked to be on a team or the last.

“For those games the students really enjoy playing”, I recall the teaching saying, “your son is chosen last because he typically changes the rules of the game and his classmates don’t want this. But, for the games they don’t like playing, your son is the first one chosen. What ends up happening is a whole new game is played when he participates, and the entire class loves it.”

The major highlight of this story for me, and one that makes my heart dance, is that my son would take on a leadership role by changing the rules of games and having his fellow students follow along. It didn't matter to me that sometimes they excluded him, because that is the nature of the way children play.

Ironically, 'sorry' was never a word I said when someone in his school told me of his inappropriate behaviour. So why am I constantly saying it when we are in public?

A main reason I apologize in situations like grocery shopping is to quell my anxiety of the thought that we will be asked to leave. This is because I believe that many people silently harbour the notion that individuals like my son should be segregated from mainstream society if they can’t behave properly.

I fear not being able to emotionally handle this kind of rejection, should a few people complain to the store manager about his behaviour, and we get ousted. So, I remorsefully apologize in an attempt to appease anyone looking for a chance to complain.

But I also realize that in order for my son to learn how to grocery shop, he needs to learn how to navigate well with a shopping cart. So, I have decided to adopt the slogan from the Canadian Down Syndrome Society, “say anything but sorry” when shopping with him.

This will require me to get a better handle on my fear and anxiety. This might be easier said than done. So, I’ll keep you posted on my progress!

Share your story at Disability Matters. We're here to listen.

Article published on 30 November 2017 by

My First Experience of…

Discrimination, defined by the Canadian Human Rights commission, is an action or a decision that treats…

There Must Be A Reason…

I am 10 years old. My brother and I, along with our parents, have just finished the tour of Hershey’s…