The Cognitive Decline From Vascular Dementia 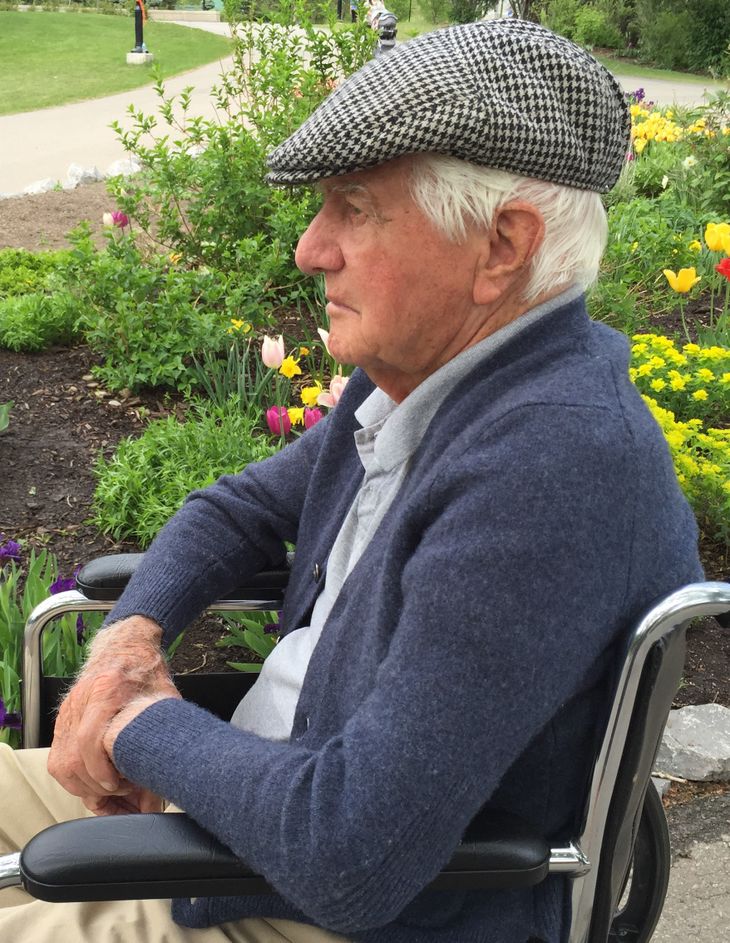 Family life can include the joy of getting a first job, marrying, and watching children grow. It can also include the turmoil of job loss, disability, and the death of loved ones.

One of the hardest aspects of my life is witnessing my father-in-law’s cognitive decline from vascular dementia. It’s slowly robbing our patriarch – a man I love and admire – of his memory-rich mind, full of life experiences and brilliance.

It’s 1942. England is in throes of the second world war. My father-in-law is 15 years old. His parents work hard to save money, especially for his education. It’s a privilege only a few enjoy.

His high intellect earns him entry into a secondary technical college near Manchester at the age of 17. His class photo portrays a broad-smiling, lean man, with chisel-sculpted high cheekbones. His symmetrically well-defined jaws meet at the apex of his dimpled chin.

He is studying civil engineering. He is, by nature, a verbally reserved individual, especially when the conversation involves his accomplishments.

Upon graduation in 1946, and with a highly prized degree in his technically skilled hands, he leads a small group of Royal Engineers, a corp of the British army, building and dismantling Bailey Bridges throughout England’s post war-torn countryside. His job is physically labourious, and he suffers a work injury.

A sharp metal piece of a bridge falls to the ground and his left hand is caught underneath it. His middle finger is severed, guillotine-style, at the distal joint. He is compensated 60 British Pound Sterling, equivalent to nearly $5,000.00 (CAD) today. He uses the money to buy himself a motorcycle, as any male teenager would likely do.

Upon war’s end, he lands himself his first job in Britain's private sector as a construction engineer. His barber-shop short, jet-black hair has grown into thick waves that crown his head. He has become rather socially apt, and can keep even the most uninterested engaged in conversation.

By 1951 and age 23, he trades in his motor bike for a new, company leased Armstrong Siddeley motor car, and carefully begins navigating a career in hydro-electrical engineering. The construction of the Owen Falls Dam in Uganda marks his first of many jobs in this world-wide, burgeoning industry.

His intelligence, Cary Grant good looks, and car make him the envy of most bachelors, who are now fewer in number than in any other generation that has come…and gone. He has been courting three beautiful women, including his soon to be Barbie doll wife, lean and long of arms, torso and legs.

Her corporal beauty candy coats inner traits of intelligence and resourcefulness equal to my father-in-law’s. She too is socially apt, and her musical talent is as welcomed at parties as she is. A British niece of his recounts the first time she met her.

“…[He] brought her down to Brighton to meet us, before they were married. She sat near the fireplace in the living room and sang ‘I love Paris in the Springtime’. I was absolutely mesmerised!!!! She was so beautiful!”

My parents-in-law both play bridge. It’s a pastime of strategic bidding, focussed play, and a collection of tricks that matches their competitiveness and personalities very well. But it is her willingness to travel the world that truly captures my father-in-law’s heart.

Their combined set of talents serve them well as itinerants in their sojourn travels. They will spend a lifetime working and raising their children abroad—from Kenya to Canada.

In their early years, their four children enjoy an educationally rich, diverse, and adventurous life in places such as India, Pakistan, and England. They eventually re-settle in Canada and watch as their children blossom into adulthood, graduate, marry, and have families of their own.

It’s now 2013 and the autumn of my parents-in-law life is upon them. They have long since retired and are living in British Columbia. The past 60 years of life together has been kind to them.

They have remained very lean and in good shape for their age. They are still quite active. But we are noticing changes in our 85-year-old patriarch, both physically and cognitively. He is diagnosed with vascular dementia.

Over the next few years, his brain’s ability to calculate even the simplest of mathematical equations and to participate in discussions about current affairs diminishes exponentially. His aged wife, now sick, can no longer care for him.

So we agree to have him come live with us in Alberta. It’s spring 2016. His care is constant and his needs progressively increase over time. He is easily confused of time and place, delusional of events, and sometimes paranoid, especially in his belief that people will harm us.

We take him on daily walks in our neighbourhood. As we travel along the Bow river pathway, we cross the 200 metre spanned, red-coloured, double helix-shaped bridge. Each time, I ask him to name it, as I push him along in his wheelchair. Each time, I wait in silence with hope that he remembers. But each time he tells me he doesn’t know.

“Ahh”, he replies, as is if he’s hearing its name for the first time.

His recall for most things present is all but gone. We continue to feed his mind by taking him to new places, engaging him in entertaining events, and talking with him about current news. But, the cogwheels of his once brilliant mind have all but seized and new information can no longer be stored.

For a man who once built bridges as a career and played bridge as a pastime, he is losing the most precious of all bridges: the cerebral synapses, essential for coherent thought and communication. At day's end, all we can do is watch, helplessly, as he slowly descends into a cognitive abyss.

When at home, he sits slumped and purse-lipped. He rarely communicates unless spoken to. When he does volunteer a thought or two, it’s typically banal. The flaccid skin on his aged face, drawn down by gravity – and depression – camouflages his trade-mark, dimpled chin.

His long term memory is also failing him. It’s as if his mind’s eye is blindfolded to the eight decades of knowledge and experience housed in the crevasses of his mind.

I wish so much to have a real conversation with him. Partly because his silence and trite remarks dampen my spirit. But mostly because I no longer have the benefit of his wisdom and worldly knowledge.

But, the saddest for me is his inability to remember that his wife passed away in July 2016. When he asks where she is, and we tell him, he cries anew.

I am trying to take the compassionate route, and accept what is...and left go of what was. I comb my fingers through his hair, which is now sparse and silver-grey.

My sullenness dissipates, as he retorts in his usual witty way, “I’d thought you’d never ask.”

As I smile, so too does he. The dimple in his chin re appears, as his skin becomes taught. He is still as handsome as ever. I am able to forget, for that moment, he has dementia...and the hard work that goes along with caring for him.

But, my pleasure is soon replaced with dismay, as I notice his still full cup of tea, which I had carefully placed in front of him some 30 minutes ago, has gone cold. He is just sitting there fiddling with the frayed edges of his well-worn sweater. He is, once again, oblivious to his surroundings.

I ponder, with uncertainty, about how bad it’s going to get before he passes on to another life. I am then reminded of the words of William Shakespeare's King Lear:

So instead, I re-frame my thinking, once again, and try to enjoy his presence as wholly as I can.

If you, or someone you know, has dementia, tell us your story. We're hear to listen. Disability Matters!

The Physical Decline From…

A few years ago, my father-in-law started to complain about his balance, feelings of dizziness, and muscle…