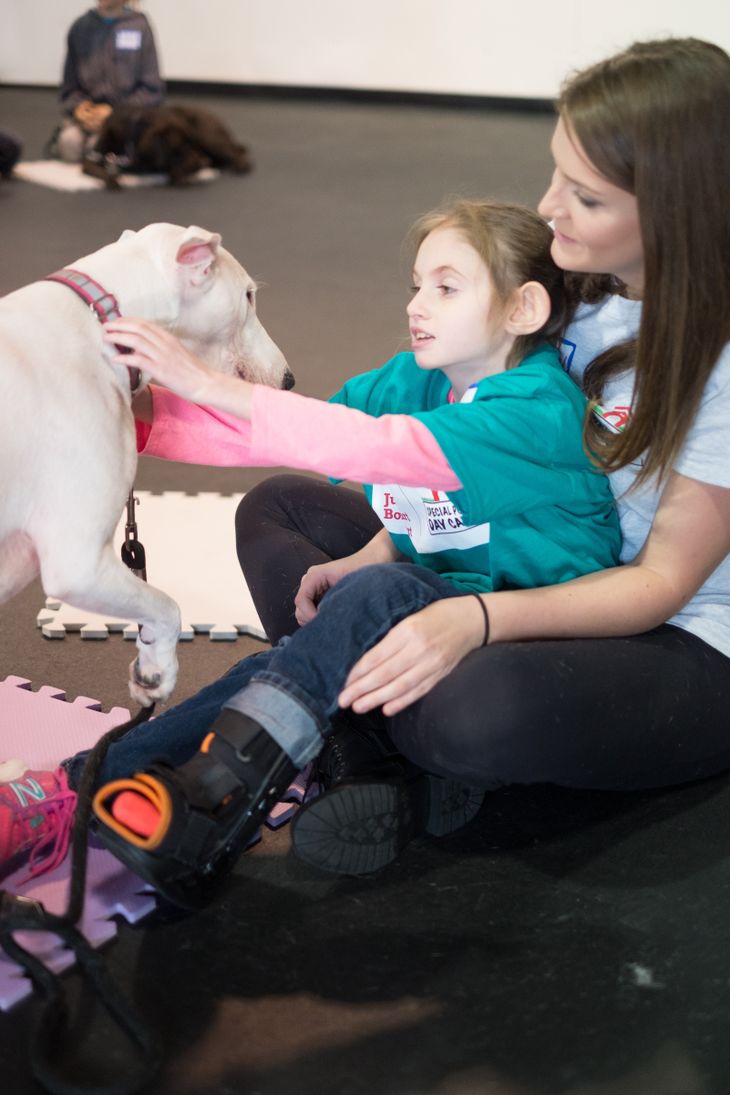 Millennials are that group of young adults most often described as the “me” generation. Well, this label certainly wouldn’t apply to Brittany Harrison, a Purchase Coordinator for Marks in Calgary, and a few of her millennial cohorts. When I discovered how they are improving the lives of individuals with special needs, the “m” in me was flipped on its head to form the concept of “we.”

Today’s Disability Matters is the first of a two-part blog that features a new program conceived by Brittany called Special Pups Day Camp. It pairs well-trained dogs and children with special needs to teach the children how to interact with man's best friend in a fun and safe way. In doing so, ‘magical moments’ are created, as described by Brittany.

Brittany Harrison is no stranger to disability. She grew up with a cousin who has autism and had an uncle who was deaf. About three years ago, she adopted Avery – a white-haired, Pitbull Terrier, who was born deaf; and later developed epilepsy and dietary allergies.

She met Avery when she was working at clevercanines, a Calgary-based dog daycare and training centre. It was founded in 2005 by a pet owner who, after learning how to train her ‘naughty’ dog, wanted to teach others how to train theirs. clevercanines now staffs about 62 people and services around 400 hundred participants each.

Avery was no older than five months when she came to clevercanines for training. Brittany was assigned to oversee her care. They bonded immediately. Even though Brittany was fully committed to training Avery, she knew it would take some time and ingenuity. Avery’s disability meant that the training program would have to be modified to one that focused less on language and more on non-verbal signals.

Brittany and the others at clevercanines set out to create a sign language that was both practical and consistent. Some of it was universal, but most was their own way of communicating – which Brittany believes comes from an indescribable intuitiveness she and Avery share.

Then, Brittany learned that Avery was up for adoption. She couldn’t resist the idea of bringing her home.

“There was something about Avery”, she recalls, that was telling her this was the right move. Still Brittany had concerns.

First, she already had another dog and a busy life. Then there was Avery’s deafness.

“What if she ran away? How would I call her back?”, she pondered.

All of this worry seemed to dissipate when Brittany witnessed Avery’s magic at work with her cousin who has autism. When Avery is around her, Brittany remarks, she just opens up – verbally and socially. It’s like a pressure valve releases inside of her, recounts Brittany, giving her the social freedom she needs to be herself.

When I asked her how well Avery now responds to her commands, Brittany’s beaming smile tells me that she and Avery have this aspect well mastered. But Avery’s deafness soon became the least of Brittany’s worries.

Within a year of their life together, Avery developed seizures and food allergies. This meant she would have to go on a special diet and spend time at the vet’s to determine how best to manage these additional challenges. Brittany looked upon this as a test from the universe: about what and how much she could handle.

Brittany remained steadfast in her commitment to care and train Avery because she could see her potential. She describes Avery’s disabilities as a bolder on the road of life: they just learn how to get around it!

“So what she can’t hear. Look how she remains by my side. When I take her off-leash, look how attentive she is. Look how much she depends upon me”, Brittany recounts through her mind’s eye.

Brittany shares with me how much her life's sojourn with Avery has taught her. I ask her to delve more into this spiritual and compassionate understanding she has acquired. Patience, gratitude, and a desire to give back are three of the fundamental principles that come to her mind.

Brittany continues to describe how Avery can connect with someone by intuitively honing in on that one thing that means so much them.

“Avery is so special and she touches every person that she meets in such a special way”.

In doing so, she says “special moments” are created through their interactions. So, it was no surprise for me to hear that Brittany was looking for a chance to put to good use what she had learned through her relationships with her cousin and Avery. And then it happened!

In March 2016, a representative from The Canadian Tire Jumpstart Charities (Jumpstart) came to Mark’s Calgary office to discuss their goal of funding more programs for individuals with special needs. Brittany thought this was her chance to create Special Pups Day Camp for children with special needs.

Stay tuned for the second part of Special Pups for Special People, wherein I take a closer look at how Brittany brought her dream idea to life. In the meantime, tell us your canine or pet story that changed a life for a person with a disability.

In part one of my two-part blog, I introduced you to Brittany Harrison and her very special dog, Avery,…

“Anything but sorry: what to say when a baby is born with Down syndrome” is a recent campaign launched…